Last week I had to finish up some work just before being able to leave for the ApacheCon EU 2007. I wanted to go there on Wednesday, to see Stefano’s No-Nonsense Introduction to “semantic web” Technologies and some Lucene talks, but I got held up until late in the afternoon.

After my arrival at the Moevenpick Hotel I teamed up with Jasha to do some preparations for our presentation on Friday. We moved some slides and made some additions to the demo. I was pleased with the ApacheCon being held at the Moevenpick. The hotel was nice and food was good and plenty of drinks during the day time!

On Thursday there were a couple of interesting session which I wanted to attend. I started out with Apache Performance Tuning Part 1, which seemed interesting in the beginning, but in the end I noticed that my knowledge of Apache isn’t as outdated as expected. Later that afternoon I visited “Up to Speed with Java Content Repository API and Jackrabbit” by Alexandru Popescu. I found it to be very interesting, since we’re looking into Jackrabbit at the moment at Hippo.

At the end of Thursday the lightning lottery talks took place and as usual this was a big laugh! I always find them very amusing and the speakers have a good sense of humor. Of course the Google sponsored beers helped a lot.

There were two more serious though of which one of them came by Stefano Mazzocchi. It was something he had to tell the ‘Cocoon community’ as a whole. Stefano invented Butterfly after leaving the message that Cocoon had become too bloated. I agree that Cocoon 2.1 is bloated, but there is a very simple explanation for that: it’s lack of dependency management. That’s where Cocoon 2.2 does a much better job in combination with Maven 2. I guess I will have to take an even deeper look at Stefano’s latest invention, to see what he actually came up with, but it sounds interesting. 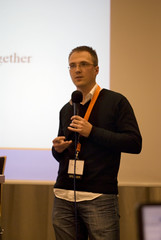 Friday was the big day where Jasha and I had to do our presentation. After some more preparations in the morning and afternoon, we went outside to get some rest and enjoy the lovely weather. I have to say that the weather during the ApacheCon was great. We talked the entire presentation through and were ready to go! First we headed for Bertrand who did an excellent talk on XSLT and XPath.

After a short break and some some delicious ice-cream it was up to us. People started coming into the room one by one and I think we had around 35 people attending our talk. For a Friday afternoon at 16.30 pm I think we did pretty well. I noticed a lot of people left early on Friday to catch their early flight or train back home. After the talk Jasha and I both had the same feeling: It went pretty well for a first time presentation together! We both found some places in the presentation where we could improve our next talk, so we’ll take that along for the next one.

After attending Andrews talk on Cocoon 2.2 and Web 2.0 we went out to enjoy the weather and some nice cold, well earned beers! I think this year was another successful ApacheCon EU. Next to all the presentations the social happening is one of the great aspects of the ApacheCon. You get to meet all the people you actually only know by name. Make sure you’ll be there next year. I heard it’s going to be in Amsterdam again in 2008!

For all the people that attended our talk: Thank you and I hope to see you next year!