As you might have read in my previous upgrade post I initially wanted to upgrade my MacBookPro5,4 mid 2009 model with an SSD. Since my initial search for a compatible SSD I’ve read tons of articles on the web describing this same issue, but without a solid answer. It’s been quite a challenge to figure out what to do and I almost gave up on the idea of being able to use an SSD until I found the this excellent blogpost by David Leach.

I’ve read similar stories to that of David, where 5 attempts with different SSD’s kept on failing and all of them gave them different kind of results from not recognizing the SSD to getting those colorful beachballs.

Davids post and the people in his comments gave me the confidence to go for a Kingston V+100 128 GB SSD as it seemed to be the one and only drive that worked for him and other readers of his blog.

So last week I ordered one and it arrived the next day! Since I had a day off I had plenty of time to install it. Only when you need to go from 250GB to 128GB you will notice how much ‘noise’ is on your laptop’s hard drive. The 128GB version was already quite expensive and I thought that the 256 GB was not really worth it. A 256GB version is around € 420,  which is in my opinion a bit too much money for an upgrade. It’s a fact that traditional HDD’s are a lot cheaper than SSDs at the moment, but the performance upgrade is really worth it.

Just after I cloned the original HDD to the SSD with SuperDuper! I tried a cold start of the MBP with the original HDD installed. The boot-up time was clocked at 1 minute and 19 seconds. That’s quite long for a fresh start. Of course I don’t restart all the time, but you get the initial idea. So after I replaced the HDD with the SSD I set the timer again and it really blew me away! The cold start with the SSD took only 21 seconds! That’s really amazing.

Now for some actual real world test I fired up IntelliJ with four projects open. IntelliJ was open within 30 seconds (with indexing) for four projects. AWESOME! How’s that for a productivity boost.

Now in my previous post I posted some benchmarks of the original stock Apple HDD vs the WD Scorpio Blue where there was only a very small improvement in overall read and write speeds.

For those of you who did not read my other post here is the performance of the Scorpio Blue 5400 rpm drive. 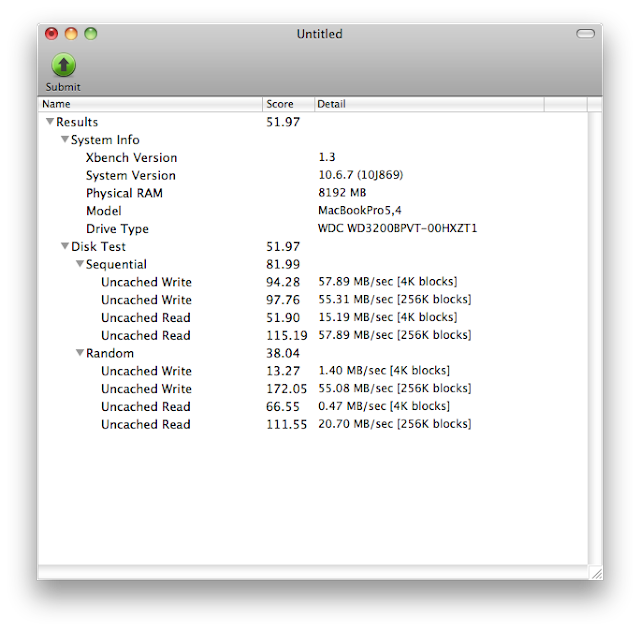 That looks nice right? But here is the Kingston V+100 SSD benchmark. 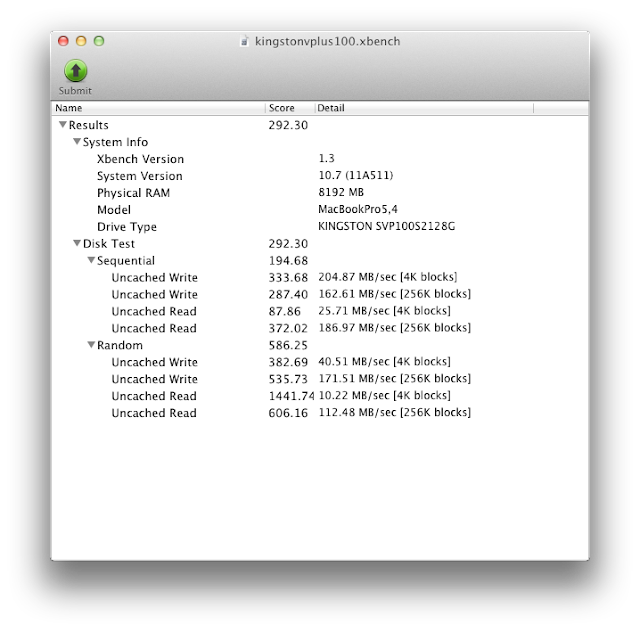 As you can see the read and write speeds have greatly improved. The average read speed is now almost four times the previous speed, which you really notice when booting up or starting an application. I’ve been using the SSD now for over more than a week during my daily work. I can tell you: I will never go back! The laptop is really fast and responsive now as I would expect a laptop should be.