The code-based source option only supports two languages at the moment: Node.js and Python. Your source also has to be stored on Github, but I expect AWS to add CodeCommit as a valid option pretty soon though. Now in my case, I would like to deploy a Java / Spring Boot based application to AWS App Runner, so my best bet, for now, is to use a container image based deployment. Now we could go for a pre-build image, but what’s the fun in that right? So in this post, we will take a look at a setup that you can leverage to deploy a Spring Boot based application to AWS App Runner. 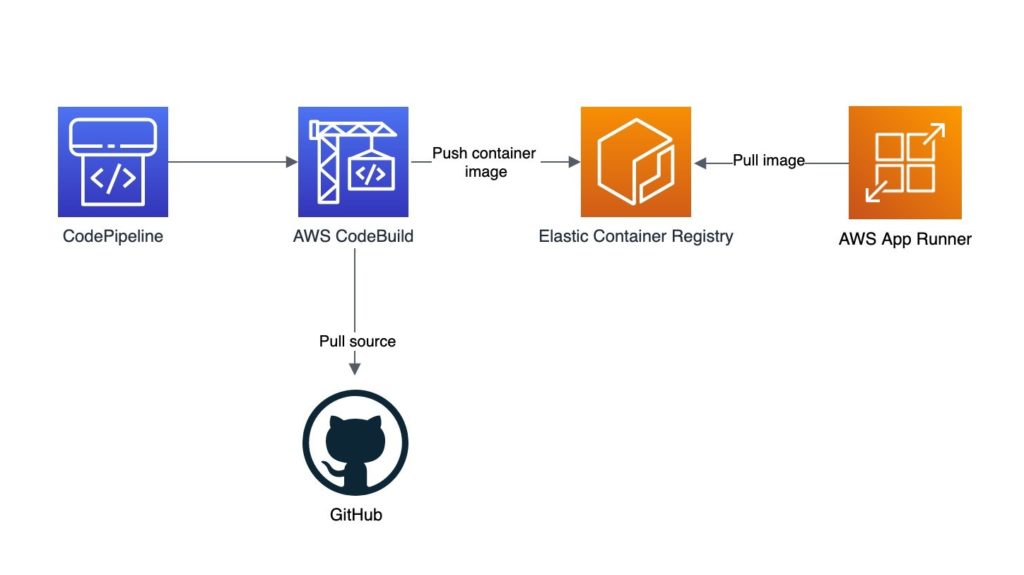 Now that we have a clear overall idea of what we need, let’s create the build and deployment stack with AWS CDK.

Setting up the basics

The first thing we will need is a private container image repository in ECR. This will allow us to store our container image and can be used later by App Runner to get our application as a container.

With the image repository in place, we can continue with the next step, creating a CI pipeline for our project.

The build pipeline makes sure that any code change will result in an update of our service. As you might have seen in the code snippet above we only build from the master branch, so any PR request, merge or commit to master will trigger a new build and will result in a new container image. In the App Runner service, which we will define later on, we can choose if we want App Runner to automatically deploy a new version of our application once it’s available. To instruct CodeBuild to build our maven based project and create a docker image out of that we can do so with a custom buildspec.yml file.

As you can see we’ve split the build into 3 separate phases:

To make sure the App Runner service can fetch the docker image from our ECR repository, we will need to create and assign a role that has the permissions to do so.

Now for the last and final part of our setup, we will need to create the AWS App Runner service via CDK.

If we look at the above code snippet we’ve setup five configuration options for App Runner:

If we want to know the URL of our new service, we can leverage a CDK CnfOutput construct in which you can request the URL of the service and it will be printed out once the stack is finished deploying.

When CDK is done with the deployment you will be able to find the URL to your service in the output of the CDK deploy.

Even if you’re not using a language supported by AWS App Runner, it’s still pretty straightforward to deploy your service to AWS App Runner. You can simply use your existing pipeline or create a new build pipeline in AWS CodePipeline that will result in an image in ECR, from which App Runner can do the rest. For this service, I’ve chosen to use Spring Native. Spring Native will create a native image for your Spring Boot application, which results in a much faster application startup. In my case, for a simple application, the time it takes for the application to start is about 500ms instead of 3 seconds (non-native image). When you expect your application to retrieve traffic spikes that might trigger app runner to scale out , this improvement can help for sure.